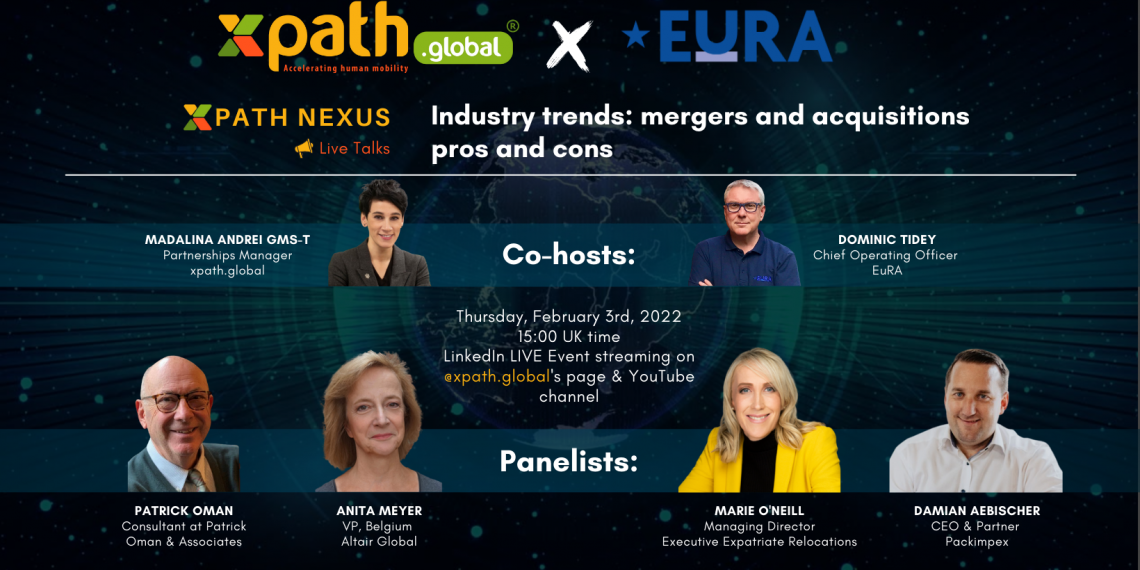 Mergers and acquisitions have become critical to the strategy of many global organizations in an era when business models are defined by expansion and digital disruption. These transactions create lots of new issues for both parties, but one thing is certain: they are both a change and an opportunity.

Our last #XpathNexus event, created in partnership with the European Relocation Association tackled the sensitive issue of mergers & acquisitions in the relocation industry.

The expert panelists were:

When one starts a company in our industry, do you think that person is aware from the outset that they’re going to sell the business at some point in the future? And if it is, do they do anything differently?

Patrick Oman: I think our industry is at a stage where quite a number of business owners have started their business 25-30 years ago. And when you add 25 or 30 years to the sort of age, they now want to retire. And that is just a dynamic of the industry. Because those of us who were around when relocation began and stayed with at all this time, have reached that age. There are quite a number of people anxious to sell their businesses move on, and the ways which are open to them are really a management buyout, or merger or straight sale.

Anita, did you see your succession planning for the eventual sale of the company, or was that not in your frame?

Anita Meyer: Not at all. Not until six months before the company was transferred into other hands. Never all through those 22 years, all in all, had I had ever the intention to sell very clear, nor succession plans. I have two children who help out: one at EuRA conferences, the other one tried to bring us into the 21st century, email and internet wise. There was never an intention to join in. So that was never an option either.

Damian, it’s a very different environment for you – you bought and sold in specifically over the last few years. Has that been part of Packimpex strategy for a while?

Damian: It’s been now for a while, but it’s not always been part of our strategy. I’d say for a large part of our history, we’ve been a very Swiss-focused company. But obviously, with the market changing with the industry-changing, as a company you need to re-evaluate your strategic options, and you need to rethink your positioning. For us, that included spinning off and selling part of the business, and then subsequently expanding our footprint. So it’s certainly not been there from the very beginning of the company, but it has now been part of our strategy for a number of years.

Marie, did you shift your company’s strategy in terms of where you are now, because of Covid, or was it part of a long-term strategy?

Marie: Yes, it was part of a long-term strategy, but I think Covid definitely pushed us nearer farther down the line than we had planned it to be. And it’s interesting, just speaking there about succession planning, we’ve only just bought the company taking over ownership, and we’re already looking at succession planning. I’m not saying it’s next week or next year, but down the line, we’re already working on that.

Thank you to our valuable speakers Marie, Anita, Patrick, Damian for accepting our invitation to come and talk about such a hot topic.

Thank you so much EuRA for partnering with us for this event.